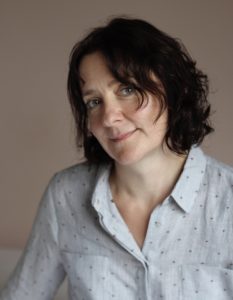 Colette Bryce is an award-winning poet from Northern Ireland. Born and brought up in Derry, she moved to England as a student in 1988 and settled in London for some years while starting out as a writer.

She received the Eric Gregory Award for emerging poets in 1995. After a year teaching in Madrid, she took up a fellowship at Dundee University from 2002-05, and was subsequently appointed North East Literary Fellow at the universities of Newcastle and Durham. She currently lives in Newcastle upon Tyne where she works as a freelance writer and editor.

Her first collection The Heel of Bernadette (2000) received the Aldeburgh Prize and the inaugural Strong Award for new Irish poets. She won first prize in the UK National Poetry Competition for the title poem of her second book, The Full Indian Rope Trick (2004), which was followed by Self-Portrait in the Dark in 2008. From 2009-2013 she was Poetry Editor for the journal Poetry London.

She received the Cholmondeley Award for poetry in 2010. The Whole & Rain-domed Universe (2014), which draws on her experience of growing up in Derry during the Troubles, received a Christopher Ewart-Biggs Award in memory of Seamus Heaney, and was shortlisted for the Forward, Costa, and Roehampton poetry prizes. Selected Poems (2017), was a Poetry Book Society Special Commendation, and winner of the Pigott Poetry Prize 2018.

In recent years, Colette has held writing fellowships at the universities of Newcastle, Manchester, Notre Dame and Trinity College Dublin, and most recently the 2018 Heimbold Chair in Irish Writing at Villanova University, PA. A new collection of poems, The M Pages, will be published by Picador in 2020.