The book, was launched by the Foyle Women’s Information Network’s (FWIN) at the Hollywell Building at Bishop Street last week.

The book, funded by the Executive Office, is the culmination of months of work and brings together the ‘forgotten and untold stories’ of a large number of women.

Speakers at the event included Mayor of Derry City and Strabane District Council, Hilary McClintock and Head of Communications for the Commission For Victims and Survivors, Tina McCann.

There were also recitals from the book from Kerri-Lynn Cooke and Lynne McCarron.

FWIN Co-ordinator, Catherine Cooke, said: “There are so many stories from the Troubles that we are all very familiar with but more often than not we are hearing a very male centred narrative.

“With this book we wanted to capture what life was like for women during the conflict, many of whom have suffered in silence for years.

“I want to take this opportunity to thank everyone who contributed to this book, if they had not been willing to share what were at times very painful memories, we would not be having this launch today.

“This book is a valuable resource not only for FWIN but for any organisation involved in good relations, the women’s sector, the community and voluntary sector etc.” 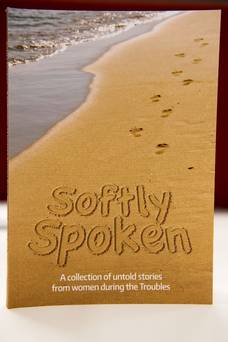