Liza Dawley, is a junior at St. Olaf College in Northfield, MN, majoring in Sociology/Anthropology with a linguistics concentration. Liza spent the semester studying and interning abroad in Northern Ireland, with HECUA’s Northern Ireland: Democracy and Social Changeprogram, based in Derry/Londonderry. Liza wrote this piece for us a few weeks ago, when members of the HECUA Northern Ireland cohort were lucky enough to meet Egyptian author and activist Mona Eltahawy. 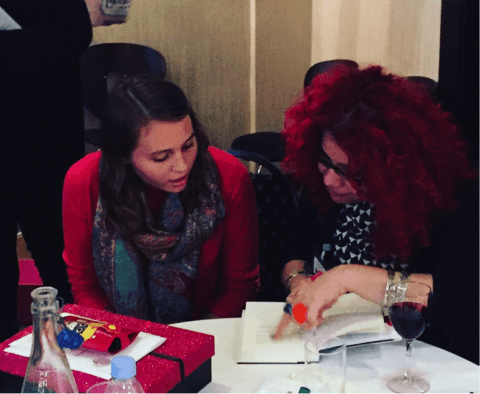 This week, we had the opportunity to meet a strong and fearless woman, Mona Eltahawy. The Foyle Women’s Information Network held a conference entitled Peace, Power, and Patriarchy. The FWIN mission is to “increase the capacity, visibility and voice of women” from the Foyle area, and this was their annual conference.

K’lah, a fellow HECUA student, is interning at The Junction alongside Maureen Hetherington, a speaker at this event. She invited us all along, and five of us were able to attend. The conference hosted three speakers in addition to Mona Eltahawy, the keynote speaker. Dr. Cathy Higgins and Maureen Hetherington spoke about patriarchy in the past and present, in the church and in society. Lilian Seenoi, a refugee from Kenya living in Derry/Londonderry, spoke about her own experience as well as migrant and refugee rights. Finally, Mona spoke about sisterhood and revolution, the trifecta of misogyny: state, street and home, and the need for a sexual revolution both in the Middle East, and universally.

Each of these women proposed questions for us to discuss with our tables and each encouraged us to start the difficult conversations about peace, power and patriarchy in society and in politics. They were all incredibly inspirational, fierce, and strong speakers.

The five of us who went were expecting to attend the conference together. However, the FWIN made the decision to split up groups and friends, and assign us all to tables. Walking in, I was quite nervous – I didn’t know what to expect, and honestly, the room was full of white and grey heads. Would there be a place for my views and opinions with such an obvious generational gap? As we got to know one another, I also realized that I was relatively new to these issues – this was my very first women’s conference, whereas for many of the ladies at my table it was old hat. I believe that I lucked out, because my table had wonderfully diverse but thoughtful ideas and opinions and were quite open and receptive to my own.

I spoke to other HECUA students who had different experiences – their table was not so much interested in talking or sharing, or were not as open to differing opinions. I learned so much about what it means to be a woman in Derry, Northern Ireland, and in the world context. This is one example of the opportunities we are presented with [on a HECUA program], living and working in a community, and I am so grateful and pleased that I took advantage of it. I felt connected to the Derry/Londonderry ‘sisterhood’ that Mona spoke about.

Mona was an incredible speaker – she followed no notes and clearly spoke from the heart and soul. She was honest, confident, and somewhat radical for the room. We met her after during her book signing, and were each able to speak to her one on one, and managed to get away with a group picture! If you haven’t already seen it on shelves, go find her book, ‘Headscarves and Hymens: Why the Middle East Needs a Sexual Revolution’. I had a lovely conversation with Mona. I collect quotes, and find quite a lot of inspiration from quotes, so I asked her if she had a favorite.

She pointed a few out in her book, but ended with the following, from Audre Lorde, “caring for myself is not self-indulgence, it is self-preservation and that is an act of political warfare.”